State of the World: Mass Killing in 2014

Twenty fourteen delivered plenty of horrible news, but a preliminary update of the Early Warning Project's data on state-led mass killing tells a more encouraging story. While episodes of state-led mass killing continued in eight countries, no new episodes began last year. That zero contrasts with three onsets in 2013 and a total of six since 2011, and it suggests that this particular form of political violence is not inexorably spreading.

As part of its risk-assessment efforts, the Early Warning Project annually updates a data set that tracks episodes of state-led mass killing in countries worldwide. For purposes of this data set, a state-led mass killing is defined as any episode in which the actions of state agents result in the intentional death of at least 1,000 noncombatants from a discrete group in a period of sustained violence. (See this pdf for a fuller explanation.)

The team that does this updating has just completed its preliminary assessment of 2014. Two countries were most closely scrutinized, but neither was found to have met the criteria the Early Warning Project uses to distinguish state-led mass killing from lower-intensity or more routine forms of state violence.

In late December, Early Warning Project coders identified eight countries with ongoing episodes, none of which began in 2014.

In some of these cases—DRC and Egypt in particular—the intensity of state-led mass killing appeared to wane in the past year (if not earlier in DRC). Still, the Project's coding rules require the passage of three consecutive years with fewer than 100 deaths before an episode is identified as having ended, so those cases are treated as continuing for now.

No episodes were marked as ending in 2014. One episode previously identified as beginning in 2013, in the Central African Republic, was reclassified as a case of mass killing perpetrated by a non-state militia (Séléka rebels).

When we convert these judgments into the 0s and 1s used in our statistical risk assessments, we can more easily examine global trends over time in this form of political violence. The charts below indicate for each year from 1945 through 2014:

As the charts show, there has been an increase in both the incidence and prevalence of state-led mass killing in the past few years, but the long-term trend remains more encouraging. Importantly, what looked in 2011 and again in 2013 like the possible start of a sustained change in the incidence of these episodes has not persisted, and the share of countries with ongoing episodes remains near its post–World War II low of about 5 percent. 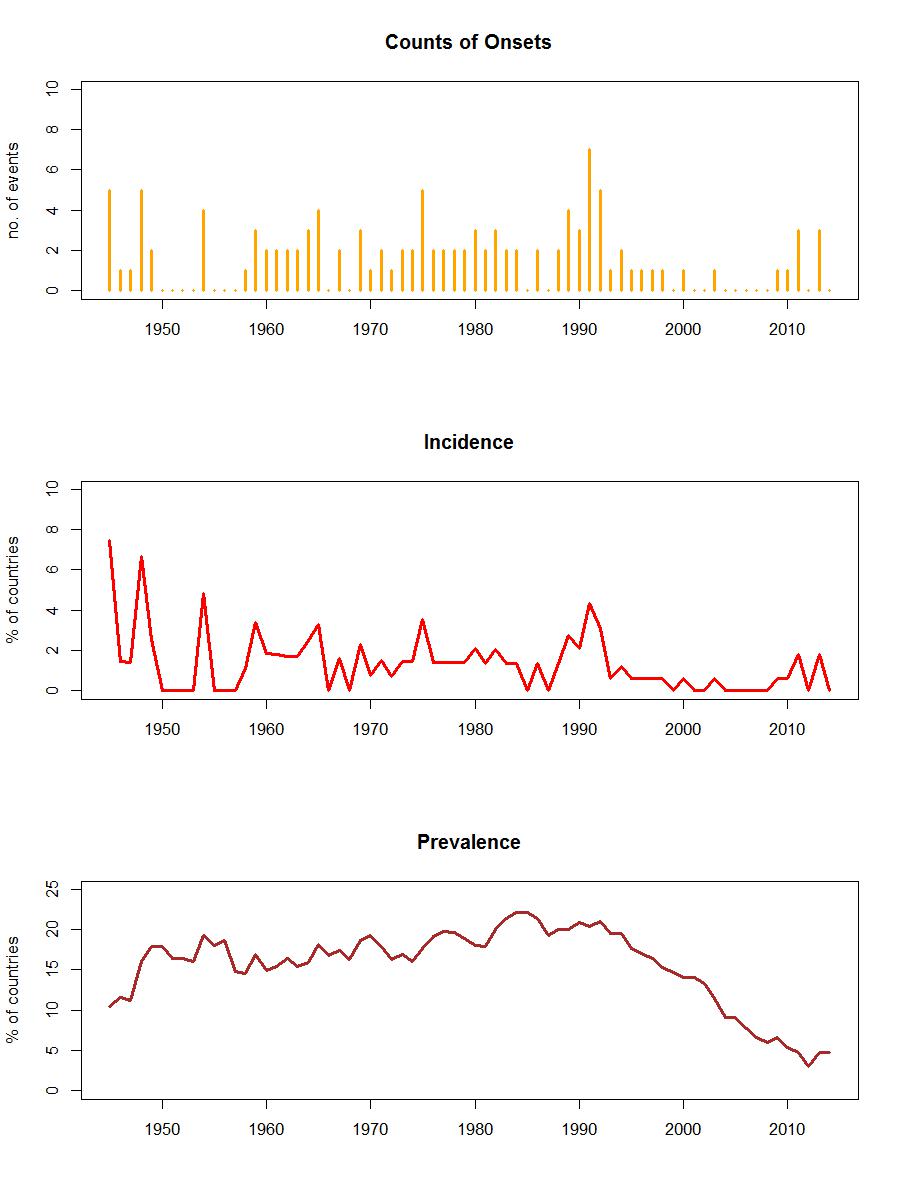 Interested parties can download the data used to generate these charts (.csv, here) and the codebook that accompanies them (pdf, here). As noted above, the posted version of this data set is a preliminary update that is subject to change as cases evolve or new evidence emerges. If you think we have overlooked or misrepresented something important, please use the Comments field at the bottom of this post to let us know.

The Early Warning Project does not (yet) produce comparable data on episodes of mass killing perpetrated by non-state actors, but that doesn't mean that we aren't paying attention to them. To help inform the work of the forecasters in our Expert Opinion Pool, coders identified the following cases of non-state mass killing as ongoing at the end of 2014. Here, the groups identified in parentheses are the perpetrators of the violence, not its targets.

Most of these episodes began before 2014, but the ones in CAR and South Sudan are relatively new, and the ones in Iraq and Nigeria appeared to escalate sharply in the past year. These facts have led some observers to wonder if we might be witnessing a broader shift in mass atrocities away from state-perpetrated violence toward violence committed by non-state actors. With the data we have now, we can't offer a confident judgment on that question, but this is a topic to which the Early Warning Project plans to devote more attention in 2015 and beyond.