Which countries around the world are currently most susceptible to new episodes of state-led mass killing? Our project's statistical risk assessments provide one answer to that question; our latest risk assessments are featured in this post.

Our project's statistical risk assessments provide one answer to that question. At the start of this year, we tinkered with the models used to generate those assessments and applied the new machinery to the inputs that were available at the time, much of it still from 2012 (see this post). By early May, all of our sources had updated their data through year-end 2013 or later, allowing us, in turn, to update our risk assessments. In future years, we expect to post updates like these to our website in the spring, as soon as all of the requisite data become available. This year, though, while that website is still under construction, we're making do with a later release via this interim blog.

Now, without further ado: The dot plot below shows the 30 countries identified by our statistical analysis as being at greatest risk this year of new episodes of state-led mass killing. Following best practices in fields like meteorology and election forecasting, we use an ensemble approach to assess risks of these episodes, combining forecasts from a few different models instead of trying to identify the single best one. The gray dots mark the forecasts from the three models in our current ensemble, and the red dots mark their average, which we regard as our single best forecast. The scale of those forecasts is the estimated probability of onset, which you can read as a percent chance (e.g., 0.10 equals 10 percent). For more information on what we mean by an "onset of state-led mass killing" and what the statistical analysis entails, see the Technical Details section at the end of this post. 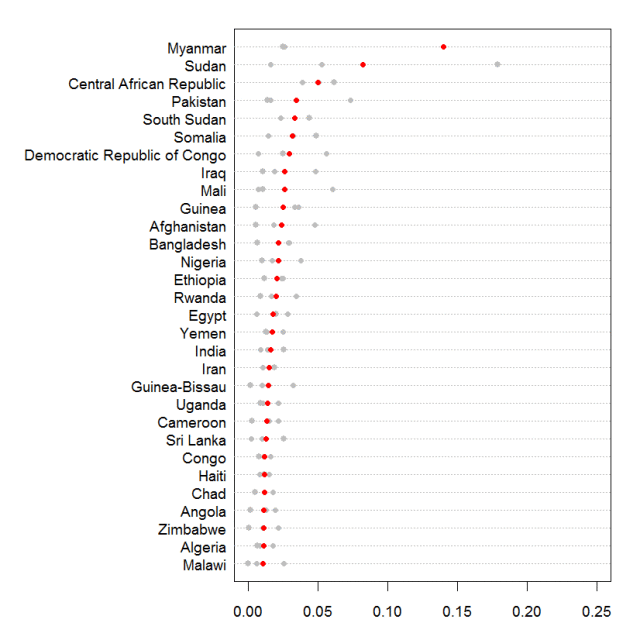 We call out the top 30 because we are confident that nearly all new episodes of state-led mass killing will occur in countries our models put in that tier.

Exactly which of those countries will see these episodes is much harder to say. Onsets of state-led mass killing occur very rarely; since World War II, the average number of onsets worldwide each year is less than two. With events that rare and relevant data hard to come by, the statistical models we can build to assess risks of these events are inevitably imprecise. At this point, statistical analysis can do a good job distinguishing the highest-risk cases from the rest of the world, but it cannot pinpoint where and when onsets of state-led mass killing will occur. To try to tease out differences in this higher-risk set, to track changes in that risk over time, and to identify vulnerable cases our models might have overlooked, we turn instead to our opinion pool, a "wisdom of crowds" system that elicits and combines similar forecasts from a collection of subject-matter experts.

One way to check the reliability this process is to look back at the statistical risk assessments we produced last year with data from 2012 and see how they fared. As noted at the top, the models have changed a bit, but the basic process is identical.

We can also visualize our updated statistical assessments using a heat map.

Here is the global risk landscape that emerges from the latest available data. Each step up on the color scale corresponds roughly to a doubling of estimated risk—from less than 1 to 1–2 percent, from 1–2 to 2–4 percent, and so on. 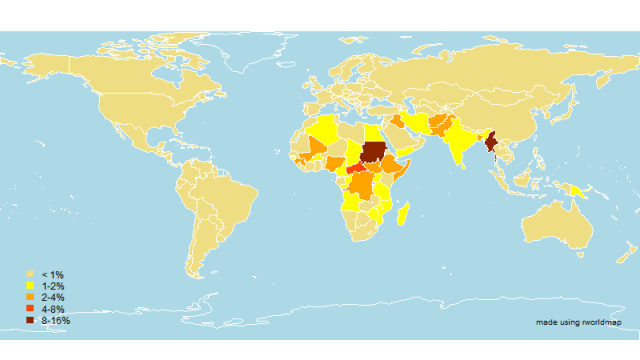 If you compare that picture and the dot plot to the ones we drew with data from 2012 (here), you'll see that not much has changed. Most of the factors included in our models are structural features of countries' politics, economy, and society that hold steady in most cases from year to year. So, most of the countries that made their way toward the top of the global list before remain there now, and most of the rest of the world remains at very low risk.

Most, but not all. In the update, three countries saw fairly substantial changes in their estimated risk of new episodes of state-led mass killing.

We consider a state-led mass killing to have occurred if the deliberate actions of state agents or other groups acting at their behest result in the deaths of at least 1,000 noncombatant civilians over a period of one year or less.

Countries can experience more than one episode of state-led mass killing at the same time, if and when the state targets more than one discrete group in distinct conflicts. Sudan is a contemporary example, with ongoing episodes of state-led mass killing in Darfur and South Kordofan. Consequently, all states are theoretically at risk of a mass-killing onset every year, even if they already have one or more episodes of mass killing ongoing. Because all states are theoretically at risk of an onset all the time, all country-years are included in the statistical analysis.

Of course, rebel groups and other non-state actors also kill civilians, and sometimes on a scale that also meets our definition of mass killing. Our statistical risk assessments only consider state-led mass killing, however, because they are produced by models that have to be “trained” on historical data, and at present we only have deep and reliable data on mass killings carried out by states. If and when we are able to produce or obtain comparable data on mass killings perpetrated by non-state groups, we will expand our statistical modeling to incorporate them as well.

Our statistical risk assessments are an average of forecasts from three models representing some different ideas about the origins of mass atrocities or how to assess them.

All of these models are developed from and applied to publicly available data from reputable sources.

All of these models are estimated from historical data that compares cases where state-led mass killings occurred to ones where they didn't. In essence, we look to the past to identify patterns that will help us spot cases at high risk of mass killing now and in the future.

To get our single-best risk assessment, we simply average the forecasts from these three models. We prefer the average to a single model's output because we know from work in many fields—including meteorology and elections forecasting—that this "ensemble" approach generally produces more accurate assessments than we could expect to get from any one model alone. By combining forecasts, we learn from all three perspectives while hedging against the biases of any one of them.

Researchers interested in replicating and extending our latest analysis can find the data and code they need to do that through this Github repository.