State of the World: State-Led Mass Killing Through 2015

These countries have experienced ongoing episodes of state-led mass killing or mass killing perpetrated by non-state actors that have lasted through 2015 and into the current year.

Launched in September 2015, the Early Warning Project tells policymakers and advocacy groups where the next mass atrocity is most likely to occur. With this information, policymakers and NGOs working in at-risk countries can act to prevent atrocities before they occur, when options are more plentiful and less invasive than options available when violence is underway. Our early warning system uses patterns present during past instances of mass killing to forecast when they might happen in the future. To do this, we track and continually update a list of countries experiencing onsets of state-led mass killing. This also gives us an opportunity to examine the state of the world each year.

In 2015, no new episodes of state-led mass killing began but none of the eight episodes ongoing episodes ended either. This is according to our team of researchers that tracks these situations.

These countries have experienced ongoing episodes of state-led mass killing that have lasted through 2015 and into the current year.

The names of the targeted communities are in parentheses:

The country that came closest to joining this ignominious group in 2015 was Iraq, where our researchers concluded that Shia militias aligned with the government have deliberately killed hundreds of Sunni civilians since 2014. Absent clear evidence that the death toll from these deliberate killings has crossed 1,000, however, our researchers chose not to declare this situation a new state-led mass killing—yet.

In Yemen, the U.N. estimates that nearly 3,000 civilians have been killed in fighting between rebel groups and international forces backing the country’s official government. As we explained in a November 2015 blog post, however, our project’s definition of state-led mass killing excludes situations in which one country’s armed forces attack civilians in another country’s territory. So, as atrocious as it is, we do not consider this situation to be a state-led mass killing as we define it.

Many experts and advocates also described Burundi in 2015 as a country on the brink of mass killing or genocide, and evidence gathered by Amnesty International suggests that state security forces killed scores of civilians following rebel attacks in mid-December. The number of civilians deliberately killed in Burundi’s continuing crisis remains far below the 1,000-death threshold we use to identify episodes of state-led mass killing, however, so the country remained off this project’s list of ongoing cases.

For the past two years, the Early Warning Project has also sought to track episodes of mass killing perpetrated by non-state actors—usually rebel groups or other militias that target civilians in pursuit of political power in a particular area.

Unfortunately, we do not have historical data like we do for state-led mass killing to assess long-term trends in the deliberate, large-scale killing of civilians by non-state actors.

As with state-led mass killings, this list is subject to revision as more or better information comes to light. 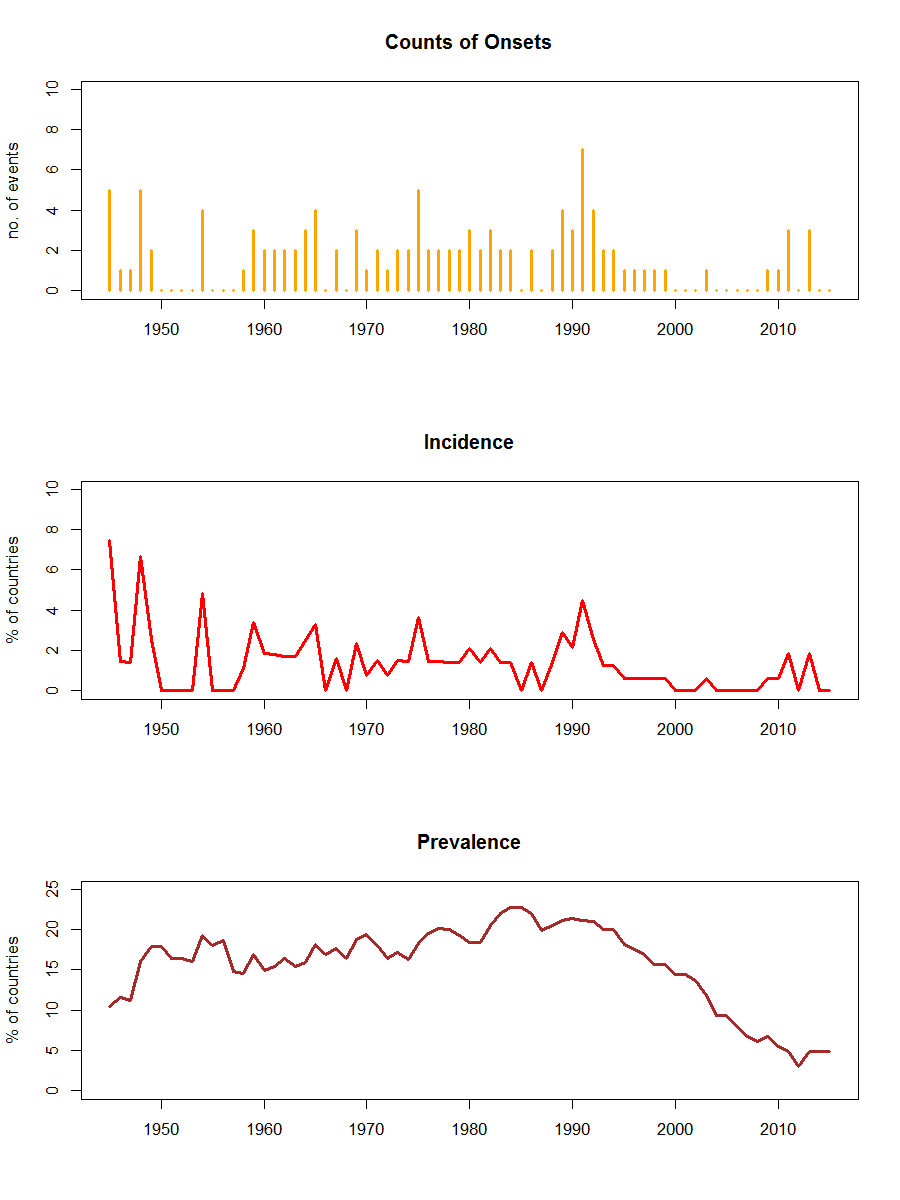 For purposes of this project, we consider an episode of state-led mass killing to have occurred when the deliberate actions of state agents or other groups acting at their behest result cumulatively in the deaths of at least 1,000 noncombatant civilians. The onset of an episode is dated to the first year in which at least 100 civilians are killed. Once an episode has begun, we consider it to be ongoing as long as no more than two consecutive years pass with fewer than 100 deaths. When three consecutive years pass with fewer than 100 deaths, the episode is considered ended, and its end is backdated to the first of those three years with (relatively) low levels of violence. When in doubt, we presume that the status quo persists—that no mass killing has begun, or, in ongoing episodes, that the mass killing continues.