Which Countries Are Most Likely to Suffer Onsets of State-Led Mass Killing in 2015?

Which countries are most likely to suffer onsets of state-led mass killing in 2015?

The dot plot below shows the 30 countries our statistical risk assessments identify as the most susceptible, using data describing conditions in those countries—and the 132 others in the world with populations larger than half a million—at the end of 2014. The red dot represents our best estimate, and the grey dots represent the three different forecasts from which that estimate is derived (see the Technical Details at the end of this post for more information). The estimates described here were produced in May 2015, soon after the last of the sources on which our statistical models depend had posted new data for the previous year. We focus the discussion on the top 30 because we are confident that nearly all onsets that might happen in 2015 will come from this group. The limitations of available data and the complexity of the politics that produce state-led mass killings make it impossible to predict these onsets with precision, but our analysis of historical data shows that we can identify a swathe of most susceptible countries with high confidence.

For the second year in a row, our statistical assessments identify Myanmar as the country most susceptible to the start of a new episode of state-led mass killing. This year’s assessments come at a time when many advocates and other observers are warning loudly about the imminent risk of genocide in Myanmar in response to discriminatory policies targeting the Rohingya minority and spurring many of them to flee the country. Our statistical assessments corroborate those concerns, as do the judgments of participants in our opinion pool who are making forecasts on this topic.

One country that was already in the top 30—Nigeria—saw a significant increase in its estimated risk that pushed it all the way to the second spot on our list, just behind Myanmar. For Nigeria, although violent conflict intensified within its borders and in some of its neighbors, there were no dramatic changes to any of its inputs this year. Instead, its climb up the list was driven by a sharp increase in risk as estimated by Random Forests, a machine-learning algorithm we apply to all of the factors used in our two other models, which represent contrasting theories about the origins of mass atrocities. We can’t unpack this algorithm to say exactly why that jump happened, but it is worth noting that historical analysis shows the forecasts from Random Forests to be more accurate than the ones from either of the theory-specific models. It is also worth noting that we already consider two episodes of mass killing to be underway in Nigeria—one perpetrated by Boko Haram, and another by state security forces in their efforts to defeat that insurgency. This new assessment pertains to the risk of a new episode of state-led mass killing targeting a group other than alleged members or supporters of Boko Haram.

Three countries saw significant increases in their assessed risk that pushed them into the top 30 this year:

Several countries in the top 20 could be considered surprises, in the sense that they rarely appear on lists or in conversations about cases at high risk of mass atrocities:

Many of the other countries near the top of this year’s list—including Sudan, South Sudan, Iraq, Afghanistan, Pakistan, Central African Republic, and Ethiopia—are ones that have landed there in each of the three years we have done this process and will probably continue to do so remain there for the foreseeable future. Almost all of those are countries that conventional wisdom in the atrocities-prevention community also would also identify as higher-risk cases, and some of them already have ongoing episodes of state-led mass killing. This is as it should be. Many people who study or work on this problem at the regional or global level often have a good sense which countries are perennially susceptible to mass atrocities, and if our statistical analysis is well designed, it should confirm most of those judgments. That these assessments are considered common knowledge should not diminish the attention directed at these relatively high-risk cases.

A handful of other countries moved into or out of the tail end of the top 30 in 2015 as the cumulative result of small changes in their inputs and the ones for other countries with similar risk profiles. This kind of churn among countries that are riskier than most of the world but not quite as susceptible as the top 15 or 20 is not especially meaningful, as the changes in the underlying forecasts are too small to interpret with confidence. Countries in this set include Cote d’Ivoire and Mauritania, which both slipped into the top 30 this year, and Mozambique, which slipped out. 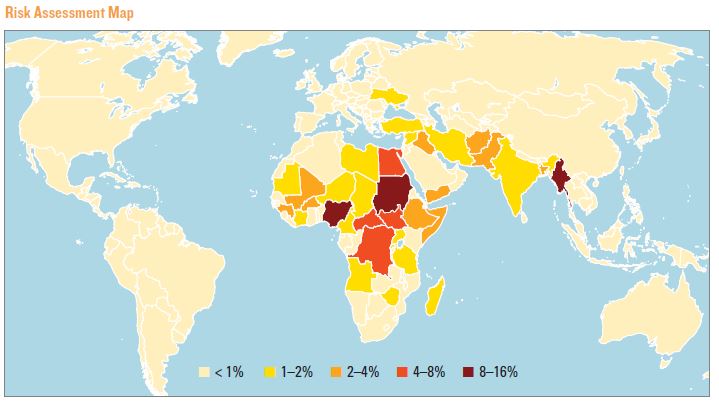 Finally, our statistical assessments see lower-than-expected risk in at least a few countries:

We expect to update these assessments again in the spring of 2016, when the public data sources on which they depend post their takes on conditions in 2015. In the meantime, we will use our opinion pool to find out what subject-matter and area experts think about where the highest risks are, and how they are changing over the course of the year. Within the next few weeks, we also plan to update our public repository with the data and code we used to generate this year’s assessments so interested researchers can get a better feel for the analytical process, check our math, and help us search for ways to do this even better.

We consider a state-led mass killing to have occurred if the deliberate actions of state agents or other groups acting at their behest result in the deaths of at least 1,000 noncombatant civilians within their own country over a period of one year or less.

Countries can experience more than one episode of state-led mass killing at the same time, if and when the state targets more than one discrete group in distinct conflicts. Sudan is a contemporary example, with ongoing episodes of state-led mass killing in Darfur and South Kordofan. Consequently, all states are theoretically at risk of a mass-killing onset every year, even if they already have one or more episodes of mass killing ongoing. Because all states are theoretically at risk of an onset all the time, all country-years are included in the statistical analysis.

Of course, rebel groups and other non-state actors also kill civilians, and sometimes on a scale that also meets our definition of mass killing. Our statistical risk assessments only consider state-led mass killing, however, because they are produced by models that have to be “trained” on historical data, and at present we only have deep and reliable data on mass killings carried out by states. If and when we are able to produce or obtain comparable data on mass killings perpetrated by non-state groups, we will expand our statistical modeling to incorporate them as well.

Our statistical risk assessments are an average of forecasts from three models representing some different ideas about the origins of mass atrocities or how to assess them. All of these models are developed from and applied to publicly available data from reputable sources.

All of these models are estimated from historical data that compares cases where state-led mass killings occurred to ones cases where they didn't. In essence, we look to the past to identify patterns that will help us spot cases at high risk of mass killing now and in the future.

To get our single-best risk assessment, we average the forecasts from these three models. We prefer the average to a single model's output because we know from work in many fields—including meteorology and elections forecasting—that this "ensemble" approach generally produces more accurate assessments than we could expect to get from any one model alone. By combining forecasts, we learn from all three perspectives while hedging against the biases of any one of them.