State of the World: Mass Killing in 2017

The Early Warning Project uses patterns from past instances of mass killing to forecast where new mass killing episodes are most likely to happen in the future. Each year we update our list of countries experiencing state- and nonstate-led mass killing. The following report compiles our determinations for onsets of mass killing in 2017 and those episodes that we can now judge have ended.

The Early Warning Project uses patterns from past instances of mass killing to forecast where new mass killing episodes are most likely to happen in the future. Each year we update our list of countries experiencing state- and nonstate-led mass killing. The following report compiles our determinations for onsets of mass killing in 2017 and those episodes that we can now judge have ended.

The Early Warning Project marked an onset of state-led mass killing in Burma/Myanmar in 2017, where state violence against the Rohingya population in Rakhine State escalated sharply in late August, in what the top UN human rights official called a “textbook example of ethnic cleansing.” Based on a survey of refugees and established epidemiological methods, Médecins Sans Frontières (MSF) estimated in December 2017 that—“in the most conservative estimations”—6,700 Rohingya civilians were killed in Burma due to the violence that began in August 2017. UN officials were estimating around 1,000 deaths already in September of 2017. Given the large numbers of Rohingya refugees in Bangladesh and newly internally displaced persons in Burma—655,000 and 57,000 respectively as of December 2017—as well as the satellite imagery evidence of the destruction of hundreds of Rohingya villages, we deem the estimates above 1,000 civilian fatalities to be credible. The Simon-Skjodt Center published a report in November 2017 documenting “how the Myanmar Army, Air Force, Police Force, and armed civilians carried out an unprecedented, widespread, and systematic attack on Rohingya civilians throughout northern Rakhine State with brutal efficiency,” including incidents of rape and other sexual violence, arbitrary mass arrests, enforced disappearances, and forced displacement. We back-date mass killing onsets to the first year when more than 100 civilians were killed in the campaign; thus we mark the start of the episode in Burma/Myanmar in 2016 based on UN reporting suggesting that the total was at least in the hundreds that year.

This episode marks a second ongoing mass killing in Burma/Myanmar, since our project distinguishes between multiple mass killings in one country if the perpetrator and/or victim group are different. In addition to the state-led mass killing against the Rohingya beginning in 2016, we also judge that the decades-long episode of state-led mass killing in the country’s east—against minority ethnic groups—continues. It is worth noting that in cases where we lack clear evidence, we carry forward our judgment from the prior year. In this case, we know that fighting between the military and Kachin Independence Army continues, information coming out of the region is scarce, and at least some civilians have been killed, so we consider the episode ongoing until we have sufficient evidence that civilian fatalities have been below 100 per year for three years in a row.

The Early Warning Project has been closely tracking violence in Venezuela to determine whether it meets our criteria for an onset of mass killing. The case for declaring an onset of state-led mass killing in Venezuela rests largely on evidence found in a recent report from the Organization of American States. The report argues that the government of Nicolas Maduro has committed crimes against humanity, including widespread or systematic killings, against Venezuela's civilian population. The OAS report asserts that several thousand extrajudicial killings by government forces or government-aligned militias since 2015 have been part of a state-led campaign to repress the opposition. Without opining on the question of crimes against humanity, we find insufficient evidence that the scale of state-led killings against a specific group exceeded 1,000 over a period of twelve months or less. The OAS report cites the former Venezuelan Attorney General Luisa Ortega Diaz, stating that 8,292 people were murdered by government forces since 2015, and a Venezuelan human rights organization, COFAVIC, as reporting 6,385 extrajudicial executions between 2012 and 2017. Others, such as Human Rights Watch and the UN Office of the High Commissioner for Human Rights, have published much lower estimates of around 500 people killed during government sponsored raids under the so-called Operations for the Liberation of the People. Furthermore, while killings of anti-government protesters—which numbered around 100 in 2017—match our definition of state-led attacks against a specific group, we find insufficient evidence to conclude that most victims of the much larger number of extrajudicial killings constituted a specific group. We will continue to assess evidence about the nature and scale of attacks on civilians since 2015 and into the future. 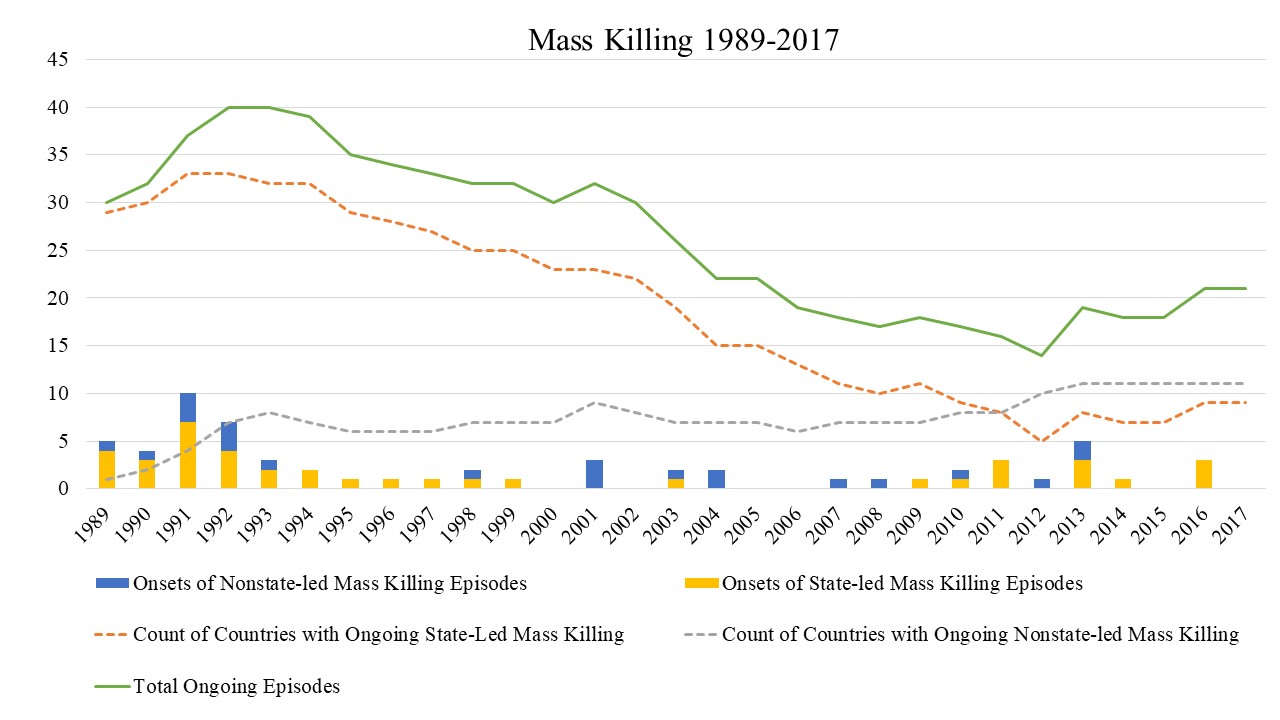 These countries were experiencing ongoing episodes of state-led mass killing as of the end of 2017. The names of the targeted communities and year of onset are in parentheses:

For the past four years, the Early Warning Project has also tracked episodes of mass killing perpetrated by nonstate actors—usually rebel groups or other militias that target civilians in pursuit of political power in a particular area.

We identified 11 ongoing episodes of nonstate-led mass killing at the end of 2017, all of them continuations of ones cited at the end of 2014, 2015, and 2016. The affected countries, with the perpetrator group and date of onset in parentheses, are the following:

As the list indicates, in some cases, although we are able to conclude that nonstate groups have systematically targeted civilians on a large enough scale to qualify as a mass killing episode, information does not allow us to identify a single perpetrator group. This is true especially in cases such as the Central African Republic and the Democratic Republic of the Congo, where many armed groups operate and public reporting on violent incidents is limited or of questionable validity.

For purposes of this project, we consider an episode of mass killing to have occurred when the deliberate actions of an armed group result cumulatively in the deaths of at least 1,000 noncombatant civilians in a 12-month period. The onset of an episode is then dated to the first calendar year in which at least 100 civilians are killed. Once an episode has begun, we consider it to be ongoing until there are three consecutive years with fewer than 100 civilian deaths. Once that occurs, the episode is considered ended, and its end is backdated to the first of those three years. When in doubt, we presume that the status quo persists—that no mass killing has begun, or, in ongoing episodes, that the mass killing continues.