State of the World: Mass Killing in 2018

The Early Warning Project uses patterns from past instances of mass killing to forecast when and where new mass killing episodes are most likely to happen in the future. Each year we update our list of countries experiencing state- and nonstate-led mass killing. The following report compiles our determinations for ongoing mass killings in 2018.

The Early Warning Project uses patterns from past instances of mass killing to forecast when and where new mass killing episodes are most likely to happen in the future. Each year we update our list of countries experiencing state- and nonstate-led mass killing. The following report compiles our determinations for ongoing mass killings in 2018. We consider the Democratic Republic of the Congo (DRC) to be a the top country to watch at risk for mass killing onset in 2019, while we determined that the mass killing in Sudan’s South Kordofan and Blue Nile states has ended.

How we determine when mass killings begin and end

We consider a mass killing to have occurred when the deliberate actions of armed groups—including but not limited to state security forces, rebel armies, and other militias—result in the deaths of at least 1,000 noncombatant civilians who are targeted as part of a specific group, over a period of one year or less. We determine a mass killing to have ended when fewer than 100 civilians of the targeted group are killed for three consecutive years.

To determine onsets and terminations, we draw on any publicly available datasets, reports of international organizations, governments, and NGOs (e.g., United Nations, US government, Human Rights Watch, International Crisis Group), and media reports. We also may call on experts to assist in our determinations when the data is inconclusive. When in doubt, we presume that the status quo persists—i.e., no new mass killing has begun, or, in ongoing episodes, the mass killing continues.

Mass killings include, but are not limited to, policies which intentionally kill civilians en masse (e.g., military strategies that intentionally target civilians, mass execution of a specific group) and policies that knowingly result in widespread death (e.g., mass starvation, confiscation of health care supplies, forced relocation). In general, unrelated executions of individuals or the accidental killing of civilians in war (“collateral damage”) will not be considered a mass killing. If an armed group is engaged in multiple campaigns that systematically kill civilians (e.g., in different geographic areas, or targeted against separate civilian groups) those fatalities will be counted as separate onsets.

Country to Watch: Democratic Republic of the Congo

The Early Warning Project has been closely tracking violence in the Democratic Republic of the Congo (DRC). Our latest annual Statistical Risk Assessment placed the DRC at the top of the list, with a 30.9% chance of a new mass killing onset by the end of 2019. Though we judge that there was no new onset of mass killing in 2018, violence against civilians should be closely monitored in 2019.

In December 2018, clashes between the Banunu and Batende communities resulted in the deaths of approximately 535 people in Yumbi, a town in northwest DRC on the Congo river. A UN investigation is ongoing, and the initial report notes “the attacks were conducted in an organized and planned manner, and were extremely violent and fast, leaving little time for the populations to flee.” Reports state that the violence was sparked by the burial of a Banunu chief on land that is home to a history of dispute between Banunu and Batende groups. As a result, approximately 16,000 people were displaced, and an estimated 7,000 fled to neighboring Republic of Congo. The situation appears to have stabilized, but if violence restarts and more civilians are killed, we may determine that this event marked the beginning of a mass killing episode.

In addition to these concerns, note that we consider there to be an ongoing mass killing by nonstate groups in the country’s northeast (mostly in North and South Kivu provinces) since 1998--the longest-running non-state-led mass killing.

Along with the DRC, the Early Warning Project tracks sixteen other high risk countries in real-time using wisdom-of-the-crowds methodology in a Public Opinion Pool. The real-time risk assessments are available on our website (and in more depth for those logged in on Good Judgment Open), and we publish quarterly retrospective analyses.

In 2011, the government of Sudan’s military began killing suspected opposition supporters in two of its southern states as part of its conflict with a separatist movement, the Sudan People's Liberation Movement-North (SPLM-N). The campaign involved intentional attacks on civilian targets, including extensive aerial bombardment. We have determined that this mass killing likely ended in June 2016 with the declaration of a ceasefire. Though our coding rules stipulate that we cannot formally call the episode ended until three full years have passed (in June 2019), we have not seen evidence that more than 100 civilians have been killed as part of this campaign in any years since the 2016 ceasefire. Recall that we determine a mass killing to have ended when fewer than 100 civilians of the target group are killed for three consecutive years. We then back-date the end date to the first year with fewer than 100 fatalities.

These countries were experiencing ongoing episodes of state-led mass killing as of the end of 2018. More details on all ongoing mass killings can be found on our website. As noted in the definition, mass killings are ongoing as long as there are at least 100 civilians killed per year as part of the episode. The names of the targeted communities and year of onset are in parentheses:

The Early Warning Project identified 11 ongoing episodes of nonstate-led mass killing at the end of 2018. The affected countries, with the perpetrator group and date of onset in parentheses, are the following:

In the chart below, the lines show the number of countries with at least one ongoing state-led, non-state-led, or either type of mass killing episode, and the bars show new onsets in each year. (Data Source: Early Warning Project episodes of state-led mass killing, available on Github.) 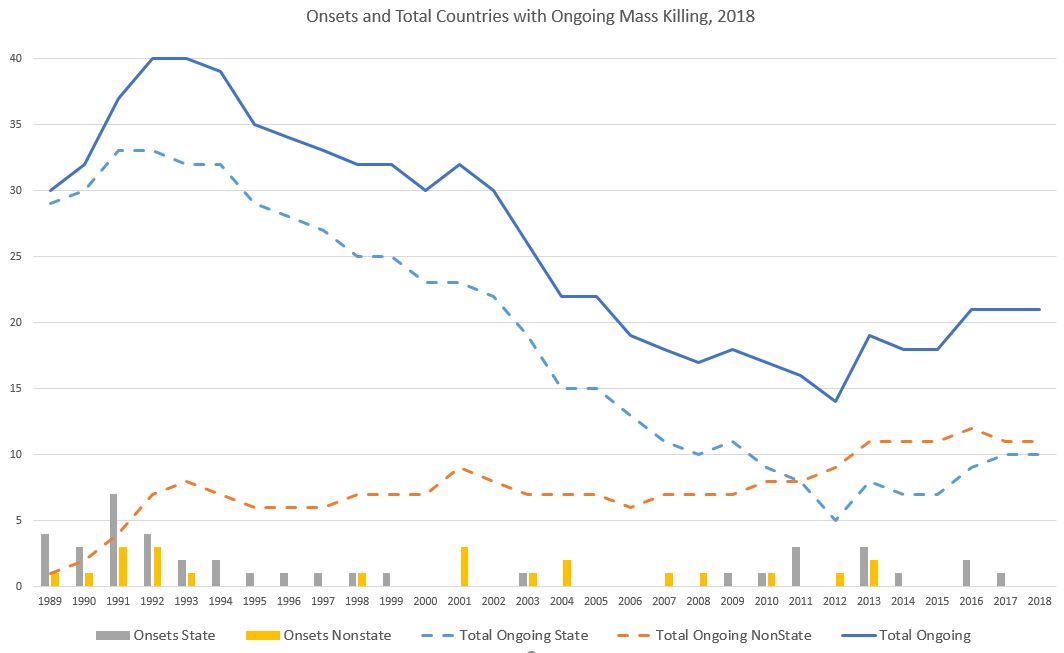