State of the World: Mass Killing in 2019

No new mass killing episodes began in 2019, according to the latest review by the Early Warning Project. This good news, however, is tempered by the historically high number of ongoing mass killings: 20 separate episodes as of the end of 2019, perpetrated by 10 states and 10 nonstate groups, in 15 countries.

The Early Warning Project uses patterns from past instances of mass killing to forecast when and where new mass killing episodes are most likely to happen in the future. Each year we update our list of countries experiencing state- and nonstate-led mass killing. The following report compiles our determinations for ongoing mass killings in 2019.

Burkina Faso came closest to meeting our criteria for a new onset in 2019. Increasing violence against civilian populations in Burkina Faso, discussed below, deserves greater attention in 2020. We also determined that the mass killing perpetrated by Thailand’s Pattani insurgents has ended. 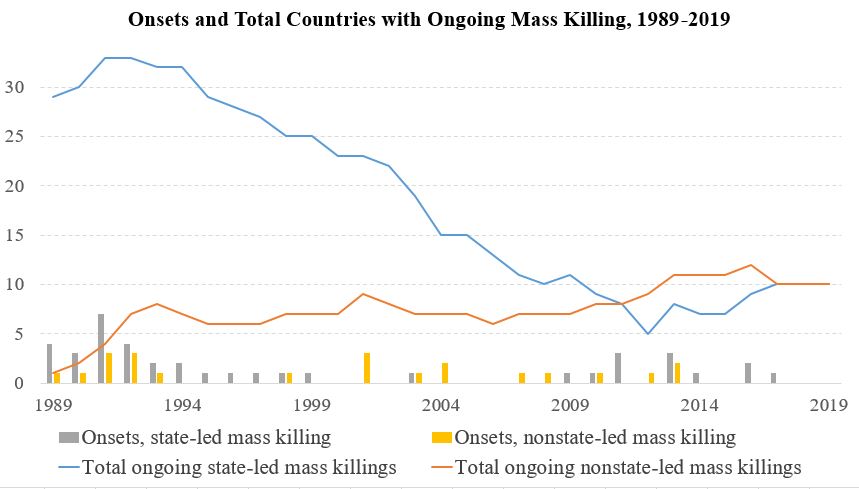 How we determine when mass killings begin and end

We consider a mass killing to have occurred when the deliberate actions of armed groups—including but not limited to state security forces, rebel armies, and other militias—result in the deaths of at least 1,000 noncombatant civilians who are targeted as part of a specific group, over a period of one year or less. We determine a mass killing to have ended when fewer than 100 civilians of the targeted group are killed for three consecutive years.

To determine onsets and terminations, we draw on any publicly available datasets, reports of international organizations, governments, and NGOs (e.g., United Nations, US government, Human Rights Watch, International Crisis Group), and media reports. We also sometimes call on experts to assist in our determinations when the data are inconclusive. When in doubt, we presume that the status quo persists—i.e., no new mass killing has begun, or, in ongoing episodes, the mass killing continues.

Mass killings include, but are not limited to, policies which intentionally kill civilians en masse (e.g., military strategies that intentionally target civilians, mass execution of a specific group) and policies that knowingly result in widespread death (e.g., mass starvation, confiscation of health care supplies, forced relocation). In general, unrelated executions of individuals or the accidental killing of civilians in war (“collateral damage”) will not be considered a mass killing. If an armed group is engaged in multiple campaigns that systematically kill civilians (e.g., in different geographic areas, or targeted against separate civilian groups), those fatalities will be counted toward separate potential onsets.

Though the Early Warning Project’s latest annual Statistical Risk Assessment ranked Burkina Faso the 55th country most likely to experience a new mass killing, events in 2019 suggest a need for increased attention to violence against civilians there. During this period, Burkina Faso experienced a rapidly accelerating extremist insurgency that has put civilians at an increased risk of intentional targeting.

While no one perpetrator group in Burkina Faso intentionally killed more than 1,000 civilians in this past year, according to ACLED, total civilian fatalities in the country increased from 177 in 2018 to 1,322 in 2019. The most violence was attributed to three Islamist armed groups: Ansaroul Islam, the Macina Liberation Front (FLM) faction of the Group for Support of Islam and Muslims (JNIM), and the Islamic State in the Greater Sahara (ISGS). Together these groups accounted for 548 civilian fatalities in 2019, according to ACLED, more than a ten-fold increase from 2018. Other actors contributing significantly to the increase in violence against civilians include state security forces and the Koglweogo Militia, a community-based ‘self-defense’ vigilante group. Security forces have presided over a brutal counterinsurgency that resulted in 422 civilian fatalities in 2019, up from 118 killed in 2018. The Koglweogo militia killed 254 civilians in 2019, an increase from only 2 civilian fatalities in 2018.

The violence in Burkina Faso is part of a troubling trend of “unprecedented terrorist violence” across the Sahel. Fatalities from attacks by armed groups have spiked in Burkina Faso, Mali, and Niger from 770 in 2016 to more than 4,000 in 2019. This violence has destabilized the entire region and threatens to spill-over to, and from, neighboring countries, including Nigeria, which is currently experiencing two ongoing mass killings—a state-led campaign since 2009 against perceived Boko Haram supporters and a nonstate-led campaign by Boko Haram militants killing suspected government supporters since 2010.

The insurgency and the heightened level of violence against civilians has also spurred a massive humanitarian crisis in Burkina Faso, leaving 1.5 million people in need of urgent assistance. With one-third of Burkina Faso now affected by conflict, as many as 560,000 Burkinabes have been displaced, 246,000 children are out of school, and drought and food related insecurity further exacerbate an already dire humanitarian situation.

Burkina Faso topped the list of countries most at-risk for a mass killing in 2020 in the Early Warning Project’s annual comparison survey.

Last year marked the third consecutive year with low levels of violence by Thai rebel groups against civilians in the country’s southern region, leading us to judge that this mass killing episode had ended in 2016.

Since 2004, Malay-Muslim separatists in Thailand’s Deep South (Pattani, Yala, Narathiwat, and Songkhla provinces) have waged a violent insurgency (also known as the Pattani Insurgency), deliberately targeting civilians and killing more than 7,000 people. Despite a continuing low-level conflict, preliminary peace talks between the government and separatists took place in March 2016 and a partial demilitarization of the region began later that year, with 8,700 Thai troops withdrawn in October, and more recalled subsequently. A framework for peace has not yet been agreed upon and talks are ongoing. Nevertheless, violence has declined dramatically since 2017. Fewer civilians were killed in 2017 than in any year since the onset of the mass killing, and 2018 and 2019 saw similarly low levels of violence against civilians.

The following countries were experiencing ongoing episodes of state-led mass killing as of the end of 2019.  More details on all ongoing mass killings can be found on our website. As noted in the definition, mass killings are ongoing as long as there are at least 100 civilians killed per year as part of the episode. The names of the targeted communities and year of onset are in parentheses:

The Early Warning Project identified 10 ongoing episodes of nonstate-led mass killing as of the end of 2019. The affected countries, with the perpetrator group and date of onset in parentheses, are the following: