State of the World: Mass Killing in 2016

The Early Warning Project uses patterns from past instances of mass killing to forecast when new mass killing episodes might happen in the future. At the end of each year we update a list of countries experiencing state- and nonstate-led mass killing. The following report compiles our determinations for onsets of mass killing in 2016 and those cases that we can now judge have ended.

Onsets of State-Led Mass Killing: Ethiopia and the Philippines

In 2016, the Early Warning Project marked an onset of state-led mass killing in Ethiopia, where government violence against protesters in the Oromo Region totaled over 1,000 civilian deaths in the 12-month period from December 2015 through November 2016. In response to a perceived government-sponsored land grab and subversion of Oromo rights, mass public protests broke out across Oromia in November 2015, to which Ethiopian security forces responded with violence and repressive actions against civilians. On October 9, 2016, in the wake of protesting and rioting at the Irecha festivities in Bishoftu, the government declared a six-month state of emergency, allowing the military to deploy across Ethiopia, banning public demonstration, and limiting access to media. From October 3-17, security forces killed an estimated 321 civilians and since the State of Emergency began on October 9, thousands of people have been arrested across Oromia. Ethiopia ranked 12th in the Early Warning Project’s 2015 statistical risk assessment.

The Ethiopia case was a very close call because the number of fatalities barely exceeded our 1,000 person threshold. There is always a range of uncertainty around fatality estimates, all the more so in cases in which journalists and human rights monitors have limited access. In this case, we relied heavily on information from the Armed Conflict Location & Event Data Project (ACLED), which is known to be a conservative and reliable source for data on violent events in Africa.

We have also determined that the killings of thousands of civilians allegedly involved in the drug trade in the Philippines qualified as an onset of state-led mass killing in 2016. Philippines president Rodrigo Duterte, who took office on June 30, campaigned on a promise to wipe out all “drug personalities”—including dealers and users—likening himself to Hitler and saying he would “be happy to slaughter” the three million drug addicts in the Philippines. In July the government launched an organized campaign to carry out his promise. From July 1 to December 31, the national police reported 2,363 people killed in police operations, and vigilante groups (who are believed to be in close coordination with police, if not off duty police officers) have allegedly killed approximately 4,500 people in the same period. Human rights groups estimate the current death toll since Duterte took office to be around 7,000.

Like Ethiopia, deciding that the Philippines qualified as an onset was a difficult call to make. We had to determine that it was different from other cases, such as Brazil, in which police kill large numbers of unrelated alleged criminals. Our judgment rested on finding that more than 1,000 of those killed met our criteria as civilians, and that the government perceived the targets of violence to be members of a discrete group. Government rhetoric, the objectives of operations Double Barrel and Double Barrel ALPHA, the major increase in killings immediately following Duterte’s assumption of power, and reports of financial incentives for police to kill people led us to conclude that the Philippines fatalities were the result of a state-led systematic campaign. The perpetrators saw their victims as part of a group, “drug personalities,” and while we consider gangs to be armed groups and their members combatants, there is significant evidence that in the Philippines many of the victims have been unarmed. The Philippine police cite self-defense to justify killing thousands. Rights groups, however, report that in many cases police planted guns and drugs on their victims after killing them, and cite witness accounts of unarmed victims trying to surrender before being killed.

We will continue to closely monitor both situations.

This year we determined that after 16 consecutive years (1998-2013) the state-led mass killing in the Democratic Republic of the Congo has ended. According to our definition, mass killings end when fewer than 100 civilians are killed for three consecutive years. We trace the end of the state-led episode in the DRC to the defeat of the M23 rebel group in November 2013. However, the DRC continues to show up near the top of our statistical risk list and there have been recent incidents of state-led violence—e.g., the UN reported that in February 2017 there was a resurgence of state-led violence against civilians in Kasai Province as a part of an anti-militia campaign, with fatality estimates over 100. We will continue to closely monitor the situation. Additionally, the nonstate-led mass killing, perpetrated by rebel groups and militias against civilians in eastern DRC, remains ongoing. This year we also determined that the state-led mass killing in Egypt against the Muslim Brotherhood and other political opponents began and ended in 2013.

Countries to Watch: Yemen and Myanmar/Burma

In Yemen, the U.N. estimates that over 10,000 civilians have been killed in fighting between rebel groups and international forces backing the country’s official government. However, as we explained in a November 2015 blog post, our project’s definition of mass killing excludes situations in which one country’s armed forces attack civilians in another country’s territory, and many of the civilian deaths in Yemen have been caused by the actions of foreign militaries. While international rights groups have accused Houthi rebels and other armed groups of deliberate attacks on civilians, such as bombings, use of snipers, and siege tactics that have severe consequences on civilian populations, we have not seen evidence that these actions have resulted in 1,000 or more civilian fatalities against a discrete group over a 12-month period.

In Myanmar/Burma in October 2016, the military and other state security forces responded to an attack on a police station with brutal violence against Rohingya civilians, including killings, rape, torture, and the burning of villages. This follows decades of persecution and low-level violence by the state against the Rohingya minority group. Although UN officials have made informal estimates that the death toll is around 1,000 based on reports from refugees in Bangladesh, data (compiled by ACLED) coming out of Rakhine State totals civilian fatalities in the hundreds. (See the Simon-Skjodt Center’s previous report on threats against the Rohingya population here.) Myanmar/Burma ranked first in our Statistical Risk Assessment in 2014 and 2015. As more information becomes available we will continue to assess the situation and adjust our determination as necessary. Myanmar/Burma is already on our list of ongoing state-led mass killings for its violence against civilians in other parts of the country.

These countries are experiencing ongoing episodes of state-led mass killing through 2016 and into 2017. The names of the targeted communities are in parentheses:

For the past three years, the Early Warning Project has also sought to track episodes of mass killing perpetrated by nonstate actors—usually rebel groups or other militias that target civilians in pursuit of political power in a particular area. Unfortunately, we do not have historical data like we do for state-led mass killing to assess long-term trends in the deliberate, large-scale killing of civilians by nonstate actors.

Based on the information we have assembled so far, we conclude that the global count of nonstate mass killings has remained constant since 2014. Our researchers identified nine ongoing episodes of nonstate mass killing at the end of the year, all of them continuations of ones cited by researchers at the end of 2014 and 2015. The affected countries, with the perpetrator group in parentheses, are the following:

As with state-led mass killings, this list is subject to revision as more or better information comes to light. 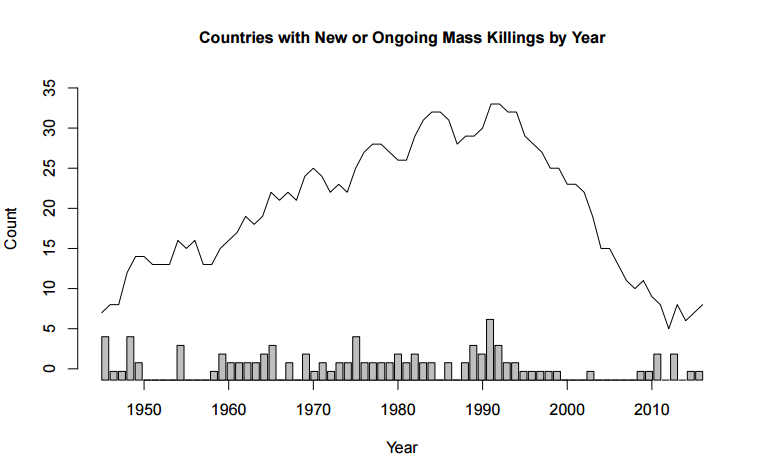 For purposes of this project, we consider an episode of state-led mass killing to have occurred when the deliberate actions of state agents or other groups acting at their behest result cumulatively in the deaths of at least 1,000 noncombatant civilians in a 12-month period. The onset of an episode is then dated to the first year in which at least 100 civilians are killed. Once an episode has begun, we consider it to be ongoing as long as no more than two consecutive years pass with fewer than 100 deaths. When three consecutive years pass with fewer than 100 deaths, the episode is considered ended, and its end is backdated to the first of those three years with (relatively) low levels of violence. When in doubt, we presume that the status quo persists—that no mass killing has begun, or, in ongoing episodes, that the mass killing continues.